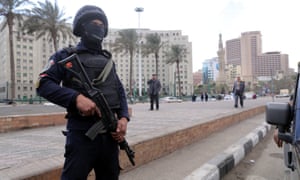 “The scale of state repression in Egypt is greater today than it has been for generations, one of the country’s most prominent journalists and human rights advocates has told the Guardian. Hossam Bahgat, an investigative reporter who was recently detained by Egypt’s military intelligence agency, spoke out ahead of the fifth anniversary of the start of Egypt’s revolution on Monday – the run-up to which has seen an unprecedented crackdown by security forces against opposition and dissent. “This is without doubt the worst we’ve ever seen,” said Bahgat, citing restrictions on media outlets, a spike in the number of political prisoners, forced disappearances, and alleged extrajudicial killings of Islamists by the state. “The level of repression now is significantly higher than it was under the Mubarak regime, and people from older generations say it is worse than even the worst periods of the 1950s and 1960s [under the rule of Gamal Abdel Nasser].” In an effort to ward off any protests half a decade on from the uprising that toppled the former president Hosni Mubarak, the Egyptian authorities have raided thousands of homes in Cairo and installed new surveillance infrastructure around Tahrir Square.”