Burned Out by Urs Fischer

When individuals face a decision to end their life in their own way an in their own time, they attempt to overcome established ways of acting and being acted upon by forming micro-political arrangements or becomings challenging the established position of the prohibition to end their life. This micro-political movement however, encounters the macro-political when they approach a court and question the established order. Hanafin (2009: 56) explains that these arrangements or becoming ‘call for another politics, a politics of becoming beyond the time of the political’. These micro-political becomings calling for another politics forces thinking law to become other than it presently is. It opens questions of bioethics calling for a focus on actual desires and interests in relation to the ending of life and the nebulous borders between life and death. However, courts assign a molar identity to these arrangements and I hope to explain this by working  with Deleuze and Guattari’s abstract faciality machine.

Furthermore, the law perceives such a request, as a treat to the legal order which requires that the law through prohibition in legislation manage and prevent the action of the subordinate individual to end their life (Hanafin 2009: 47). Braidotti, Colebrook and Hanafin (2009: 5) argues that

What is at stake here is a politics beyond the bureaucratic rights-giving or rights-depriving state, which remains after the word has been said. This is the self declaring itself not in response to the call of the state or as the subject matter of rights, but as an active participant in political affairs. It is a self which exceeds fixing.

In this and the followings post, I intend to work with Deleuze and Guattari’s abstract faciality machine as an attempt to think intensively and to investigate the possibility of exploring the leakages or lines of flight out of the confined spaces in which courts operate as explained in previous posts (here and here). By firstly focussing on the most general function of facialisation that of biunivocalization or binarisation, I illustrate that courts functions as a faciality machine producing both the concrete face and the landscape when addressing the possible infringements of human rights (Deleuze and Guattari 2005: 180-181).

Although these posts only focus on the operation of biunivocalization, I hope to explore the judge faciality machine in subsequent posts in the context of limit judge faciality machines. The biunivocalization function merely illustrate how courts function as normality computers and deviance detectors and as such I argue that possibilities of leakages or lines of flight will only be presented when working with the court as a limit machine.

This post aims to provide background on how the faciality machine operates. The following post, focuses on two recent cases in two different domestic jurisdictions, Canada and South Africa (that is so to speak worlds apart) that concerned the sensitive and controversial issue of the right to passage (euthanasia, assisted dying or assisted suicide).

This machine is called the faciality machine because it is the social production of face, because it performs the facialization of the entire body and all its surroundings and objects, and the landscapification of all worlds and milieus (Deleuze and Guattari 2005: 180-181).

The inhuman in human beings: that is what the face is from the start (Deleuze and Guattari 2005: 171).

The purpose of the faciality machine is to describe how relative fixed identities (in this context the subject of constitutional rights) are organised with respect to the standard which is derived from Christianity, starting from Jesus Christ and now exists as the white European male (Thompson and Cook 2013: 381; Watson 2008: 208). Deleuze and Guattari explain that the abstract machine resembles a standard face and not a universal face. They (2005: 176) explains that

The face is not a universal. It is not even that of the white man; it is White Man himself, with his broad white cheeks and the black hole of his eyes. The face is Christ. The face is the typical European, what Ezra Pound called the average sensual man, in short, the ordinary everyday Erotomaniac …. Not a universal, but fades totius universi. Jesus Christ superstar: he invented the facialization of the entire body and spread it everywhere (the Passion of Joan of Arc, in close-up). 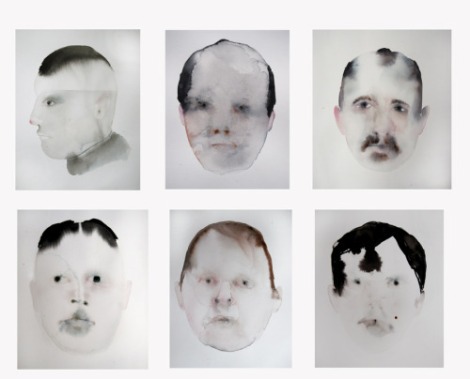 In the chapter Year Zero: Faciality, in A Thousand Plateaus, Deleuze and Guattari (2005: 171) argue that in terms of the faciality machine there cannot be ‘any appeal to a preexisting subject, or one brought into existence, except by this machine specific to faciality’. They also point out that they are not in any way suggesting that the capacity to act of the face (la puissance du visage), produces and explains social power (pouvoir). They provide the example of pre-signifying regimes, where they argue that not all assemblages of power (pouvoir) force the production of a face (Deleuze and Guattari 2005: 175). They explain that the faciality machine is triggered by signifying regimes, or in other words by assemblages of power that impose signifiance and subjectification as their determinate form of expression. For them,

There is no signifiance without a despotic assemblage, no subjectification without an authoritarian assemblage, and no mixture between the two without assemblages of power that act through signifiers and act upon souls and subjects. It is these assemblages, these despotic or authoritarian formations, that give the new semiotic system the means of its imperialism, in other words, the means both to crush the other semiotics and protect itself against any threat from outside.

Deleuze and Guattari (2005: 168) further warn that the abstract faciality machines do not resemble what it produced or will produce. This concrete face is an actualisation of the virtual terrain where the strata of subjectification and signifiance ‘are both spontaneous events and copies or returns of previous faces. The face is both a unique event and a copy – a returning visage that resonates with the past but is not of the past’ (Deleuze and Guattari 2005: 172). The face, the molar identity assigned by the faciality machine, it the inhuman in human beings (Deleuze and Guattari 2005: 171).

Faciality is a signifier that overcodes body and head into a single object (Deleuze and Guattari 2005: 170-172). O’Sullivan (2006: 311) explains that this facialisation does not end with the head but proceeds over the body and indeed the ‘landscape’ in which the facialised subject moves. Put differently, the faciality machine illustrate how our current knowledge apparatus (and the established order) produces not only subjects but also produces the space or the location in which the subject moves.

Deleuze and Guattari (2005: 170) describe the face an entirely specific idea in its nature. Facialisation operates not by resemblance but by an order of reasons. It exercises the most general of functions: the function of biunivocalization, or binarisation (Deleuze and Guattari 2005: 176). Biunivocal designates a type of relation that exclusively links two terms to one another, under the domination (or on the basis) of one of the two. In this context, the faciality machine is an ordering machine which captures the ‘the multidimensional and polyvocal flows of possibility and forces them into one dimensionality and univocity’ (Thompson and Cook 2013: 381).

The faciality machine has two aspects, the first is the computation of normalities and the second is that of choice. Neither function is restricted to individual cases but operates in just as general a fashion (Deleuze and Guattari 2005: 177-178). Under the first aspect subjectification (the black hole) the machine acts as a central computer using the standard face (that of the white European male) to produce a facial unit. This facial unit is an elementary face and does not take into account any description as to its content. It places this elementary face in a biunivocal relation with another. For example it computes whether the facial unit is a man or a woman, an adult or a child or ‘an x or a y’ (Deleuze and Guattari 2005: 177). Put differently, it turns an individual or collective body into a subject giving it a molar identity (Thompson and Cook 2013: 381). Deleuze and Guattari (2005: 167-168) describes the process as follows:

The movement of the black hole across the screen, the trajectory of the third eye over the surface of reference, constitutes so many dichotomies or arborescences, like four-eye machines made of elementary faces linked together two by two.

Under the second aspect the faciality machine, judges (it acts as an ordering machine or ‘deviance detector’) using elementary face units to enquire whether the concrete face that it identified under the first aspect passes the process or not. It acts by selective responding to the binary ‘yes or no’ question. Deleuze and Guattari (2005: 177) describes the process as follows:

The empty eye or black hole absorbs or rejects, like a half-doddering despot who can still give a signal of acquiescence or refusal. The face of a given teacher is contorted by tics and bathed in an anxiety that makes it “no go.” A defendant, a subject, displays an overaffected submission that turns into insolence. Or someone is too polite to be honest (emphasis provided).

In the following post, I attempt to unpack questions as to what (Deleuze 2014) should be addressed and organised in terms of law where the individual and collective body is daily facing the resilient biopower of political and technological assemblages, and insofar the judge as faciality machines, manages decisions about health including decision-making between the messy borders of life and death on behalf of micro-political arrangements.