“Localized, small‐scale economies
are the rats in the dinosaurs’ nests.”

Below is Kevin Carson’s wide-ranging and extensively researched treatise on how innovations in social relations and the small‐scale production of daily living can facilitate an exit from the bulky, misguided economies operating via the globalized logistical markets of apocalyptic Capitalism. Consider it a cheat-sheet to theorizing actionable patchworks prior to (and perhaps during) the coming collapses.

The Homebrew Industrial Revolution: A Low‐Overhead Manifesto
by KEVIN A. CARSON

“[I]nnovation in the technologies of small‐scale production and of daily living reduce the worker’s need for a continuing income stream. It enables the micro-enterprise to function intermittently and to enter the market incrementally, with no overhead to be serviced when business is slow. The result is enterprises that are lean and agile, and can survive long periods of slow business, at virtually no cost; likewise, such increased efficiencies, by minimizing the ongoing income stream required for comfortable subsistence, have the same liberating effect on ordinary people that access to land on the common did for their ancestors three hundred years ago…

Running throughout this book, as a central theme, has been the superior efficiency of the alternative economy: its lower burdens of overhead, its more intensive use of inputs, and its avoidance of idle capacity. Two economies are fighting to the death: one of them a highly‐capitalized, high‐overhead, and bureaucratically ossified conventional economy, the subsidized and protected product of one and a half century’s collusion between big government and big business; the other a low capital, low‐overhead, agile and resilient alternative economy, outperforming the state capitalist economy despite being hobbled and driven underground. The alternative economy is developing within the interstices of the old one,preparing to supplant it. The Wobbly phrase “building the structure of the new society within the shell of the old” is one of the most fitting phrases ever conceived for summing up the concept.” 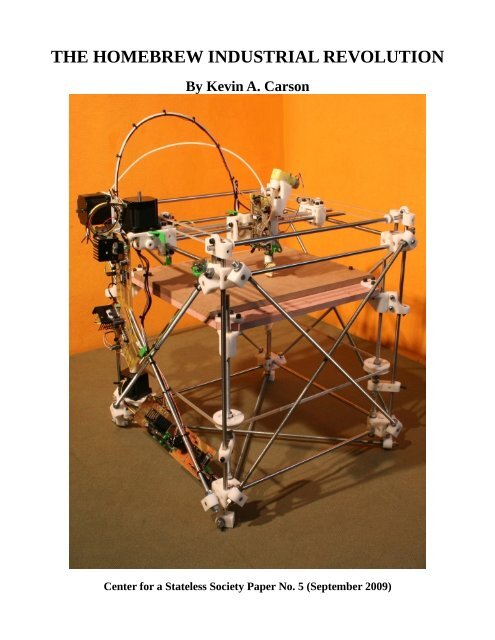