The Visible and the Invisible, by Maurice Merleau-Ponty 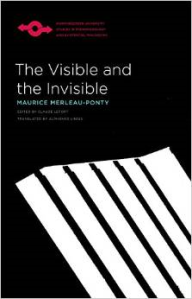 The Visible and the Invisible (1964) contains the unfinished manuscript and working notes of the book Merleau-Ponty was writing when he died. The text is devoted to a critical examination of Kantian, Husserlian, Bergsonian, and Sartrean method, followed by the extraordinary “The Intertwining–The Chiasm,” that reveals the central pattern of Merleau-Ponty’s own thought. The working notes for the book provide the reader with a truly exciting insight into the mind of the philosopher at work as he refines and develops new pivotal concepts.

[m]: Ontology has been dominated since Descartes by the subject-object dichotomy (res cogitans and res extensa) and despite many valiant attempts has been completely incapable of twisting free of this schema. This gives rise to a whole host of philosophical and infrastructural problems. Here M-P generates significant insights and philosophical advances for the praxis of ontography – not the least of which is his insistence of “the priority of being over thought.” These working notes are invaluable to the student of phenomenology and philosophies of life/death.

Merleau-Ponty spent the years just prior to his death in 1961 extending, rethinking, and in some cases revising ideas that had been at the center of his philosophical work since the 1930s. Early and late, he always tried to break down traditional dualisms, above all those of sensibility and understanding, activity and passivity, inner and outer, mind and body.

Merleau-Ponty’s final, unfinished work, The Visible and the Invisible, carries that reconciling project to new depths, and indeed new extremes, to include the past and the present, and the body and its surrounding environment. In a famously self-critical note from 1959, he confesses, “The problems posed in Ph.P. [Phenomenology of Perception] are insoluble because I start there from the ‘consciousness’-‘object’ distinction.” In the last phase of his thinking he therefore strives ever more resolutely to free himself from the received view of intentionality as subjectivity standing over against and external to objects radically heterogeneous with it, and as occupying a specious present sharply distinct from past and future moments in a linear temporality. Body and world, like past and present, he now insists, are “interwoven” in such a way that seemingly neat conceptual distinctions between them are bound to distort and misrepresent the phenomena as we actually live and understand them in preconceptual, prereflective, prearticulate ways.

Grasping the essential ambiguity of the phenomena moreover demands that we forsake the rigorous aspirations of traditional metaphysics and epistemology in favor of what Merleau-Ponty calls the “nonphilosophy” of post-Hegelian thinkers like Marx, Kierkegaard, and Nietzsche. The grand aspirations of systematic philosophers such as Kant and Hegel, that is, must give way to a new kind of concrete, descriptive, perhaps merely evocative inquiry situated essentially if uneasily between the empirical and the transcendental, or in Heideggerian terms, the ontic and the ontological. Such a conception of philosophy and its object runs a considerable risk of obscurity, not to say obscurantism, and indeed Merleau-Ponty’s late notes often seem to tread a fine line between depth and emptiness. Recurring images of “chiasm” and the “intertwining” of body and world, and of past and present, work powerfully as metaphors, but they also cry out for some lucid, demystifying philosophical interpretation.

3 responses to “The Visible and the Invisible (pdf)”