so i’m thinking about some of the arguments from a text on the role of the american state in the 20th c., esp w/ respect to US’ informal empire.  part of the argument that i see from my readings on the times of wilson and roosevelt and in btwn is how the US state didn’t have the complexity and organizational capacities to take on the british mantle for geopolitical hegemony in the wake of WW1.  it took unprecedented financial crisis–and capitalists’ desperation for the state to “do something!”–to motivate the american state to modify and expand its organizational structure and capacities, creating new departments, increasing its “man-power”, and being given more extensive powers and passing policies meant to successfully intervene on the great depression. while it took WW2 to get the US out of its depression–as well as the rest of the world it dragged in, by one form or another given the global connectivity that had emerged at the time–the US state had developed during the new deal the needed powers to later take up global hegemony post-WW2 by forming key new relationships with american (and therefore, global) financial institutions and capitalist production.

and then i thought of nick land.  land tends to leave the state out of the equation in most of his stuff i’ve read (his pre-NRx stuff), focusing instead upon the emerging (for his time) global neoliberal market and its completing ascendancy of inhuman capitalists operations of surplus valorization, in contrast to or deviously absorbing a global human population.  for land, “politics” is dead, and the market becomes the only “revolutionary” force, or at the very least, the one that liquefies all the other systems used to prop it up, including ecological ones supportive of biological life.  there is no elegy nor eulogy for such an “end” of politics: land is tired of human limitations and takes the otherwise threatening capitalist “intelligence” emerging that continuously produces and absorbs systemic crises as a superior force worth affirming, even against our own and our desire and practical abilities that seek to counter the strains and limitations on human freedom that it produces.  it is a ghastly nietzschean-hegelian combo, one that recognizes the absurdity of a geist taking “the human” as its ultimate conclusion or summit, mixed with the affirmation of supposedly greater potencies that humans are subject to in a machinic enslavement.  with capital as the “true” subject of history–or at the very least, the more “powerful” in a socio-technical inorganic darwinism–, human politics becomes a hopeless gesture that is overrun by a stronger force. 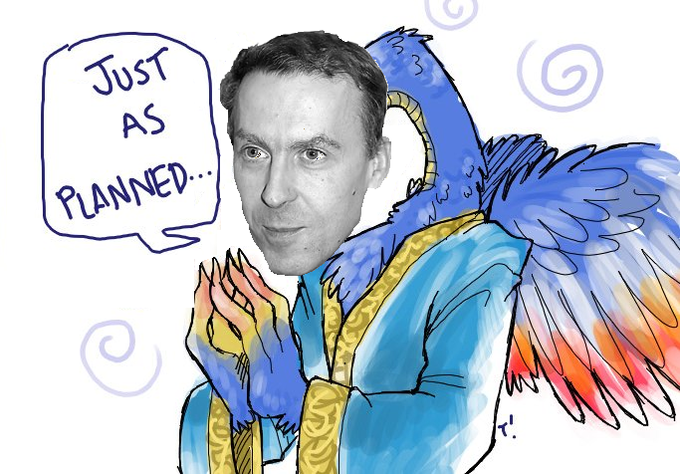 what power do social movements, land might ask, have to actually produce not only alternatives to capitalist economics–and all that brings–but ones that are more humanistic as well?  esp since they have failed since the late 60s to actually curb or decelerate capitalism’s anti-humanist putrefaction?  incidentally, this is where the left accelerationist critique of “folk politics” comes in–folk politics must be included in larger projects of counter-hegemony that can effectively understand and navigate complexity, abstraction, and technological infrastructure.  their call for “organizational ecologies” that can together tackle the problems needed to actuate any humanist “post-capitalist” project.

but it’s curious why the role of the state seems to be lacking in land’s analysis, unless, of course, i haven’t read enough of him to see what he thinks about it.  but given his silence i’m familiar with, something in my reading on the american state made a helpful conceptual connection for me.  although the state mediates class antagonism, or the antagonism btwn labor and capital more broadly (and perhaps metaphysically), it depends upon capitalist production of surplus value for it to not only sustain itself, but to also fund its cost-intensive ways of maintaining governance.  although the state mediates labor and capital, it seems to asymmetrically rely less upon the humans that compose its functioning and interests and sociality, and more upon the capital that can corrupt its politicians and make them in many ways more beholden to business interests–including transnational capitalist corporations’ interests.

at least this fatalism and cynicism about the possibility of conducting politics in land *makes sense.*  it comes from a deep mistrust about the state and its capacity to opt for something else than its own interests created through a financial reliance upon capital.  even its taxation of citizens garnering it revenue requires that sufficient wages be paid to laborers to achieve greater wealth.  and the rivalries and competition of geopolitical actors benefits greatly from such wealth as a strength, making it particularly attractive and seemingly non-negotiable for stronger states…except in exceptional times, like w/ the UK abandoning its imperial power over decades, or the beginning of the end of unipolar american hegemony.

but even more distinguishing for land, i take it, is the way in which the state might simply not be complex enough to uphold even the neoliberal capitalism which it takes as its best or only option.  that is to say, it might not have the organizational knowledge and capacities to divert the practical anti-humanism of capital, even in some cases becoming fascist regimes that promise to change things for the better but w/o being able to solve the problems it proffers solutions for.  like trump saying that he’s got all the answers, and then his eventual failure to deliver on what he says but creating conditions and perhaps even policies for overt racism and creeping fascism that recall that of the 30s.  and that this can both stem from and lead to popular discontent that destabilizes the state is astonishing, as it would diagnose a state model that can at its best only manage and govern perpetual crises but not deliver outcomes proper to a humanist institution–one by humans and for humans–but instead those proper to transnational capital.  the ttip and other trade pacts seem to indicate this willingness of the state to accept and facilitate economic policies that would set the people in an antagonism w/ the state, distancing it from the take that views the state as an essential organon to carry out a politics that can lead to humanist directions for post-capitalism.

so for land, politics is “dead” b/c you can neither count on social movements, nor on state actors and institutions:–capital reigns supreme over both forms, even if it extinguishes even itself in the process.  whether it does so would, land might argue, be dependent upon its ability to completely substitute the humanity it is annihilating with a machinic or technological intelligence that can continue the production of surplus value.

no wonder there is a resurgence of the question of the party for those desiring alternatives to capitalism (and especially *for* humanist “post-capitalism), aided in large part by varying degrees of success of leftists parties like syriza, corbyn, podemos, bernie sanders, the ndp.  and many others globally that are struggling to come onto their national scenes as a way to reject both the radical right’s fascism and the economic hegemony of neoliberal capital.  it is seen as necessary–if not sufficient, and it is perhaps here where different leftists diverge w/ regard to the state’s desirable role and actual capacities–for being able to navigate us into post-capitalism on issues like climate change and how to deal w/ the coming waves of automation of labor.  having seen syriza’s failure to follow through on its promises, bernie sanders’ campaign’s collapse, podemos’ mediocre results in the 2nd round of voting, and corbyn under threat post-brexit, one can imagine nick land smiling w/ the air of a knowing “i told you so.”

some pressing concerns then appear: what roles, organizations, and functions might social movements in the 21st century incur, and how might they have a political efficacy for desirable post-capitalist outcomes?  how to make sure leftist parties not only come into power over neoliberal and fascist ones, but are able to counteract their influence and to form mutually supportive links w/ said popular social movements?  what coming techno-economic developments can be seen as opportunities for enabling such successful experiments to navigate these crises?  how is counter-hegemony to be constructed, especially in terms of funding and the object of financial investment–easy for the mont perlin society’s taking the neoliberal path out of the economic blockages of the 70s but not for the vast majority without accessible liquidity and the like?  how is counter-hegemony able to purposively or instrumentally relate to material infrastructures in ways to support its aims for post-capitalism?  it seems clear that we have none of this as of yet, and that it is a practical imperative more than anything fleshed out right now…although that is essential for the actual thinking and acting constructive of counter-hegemonic projects.  but not to despair either, as such projects have long time scales, and we’ve only witnessed neoliberalism as “the god that failed” less than a decade ago when the 2007 global financial crisis galvanized our collective understanding that something other than capitalism is needed if we are going to survive as a species (esp w/ ecological crisis whose causes show no sign of slowing down).

nick land’s fears might end up not to be the fatalistic case he concludes them to be, but they reveal the anxiety and paranoia of knowing of capitalism’s inhumanity and its real subsumption…and what that means for our freedom, the enjoyment of our agency.  it’s pessimistic to say the least, and what becomes his theologization of this inhuman capital becomes problematic and indicative of an unnecessary metaphysicalization naturalizing an apocalyptic fatalism and despair–but his diagnosis of our crisis-ridden conjuncture is apt in many ways, and helps us to understand much of today’s craziness and the difficulty of attempting successful politics that are more than being feeble, “conservative” efforts to stymie an ineluctable capitalist “geist.”  de-potentiating his passive affect whereby he learns to desire his own servitude as if it were his freedom and reconnecting to the promethean imperative to see what a “techno-social body can do,” we can recover the needed sense of agency to involve our libidinal and informational resources in carrying out such projects.  that as summum bonum and task.

but that is very much the difficult problem now: how to take a logical and ethical imperative to drive a desirable political imperative to reformulate the economic axiom or imperative we face in its immensely global, abstract, and complex character?

7 responses to “The (Im)possibility of Politics in Nick Land”