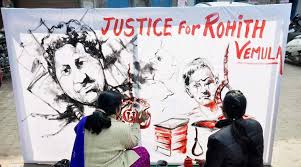 Written by Hyderabad for Feminism this article gives space for rage and a much needed one.

Suicide is the ultimate act of protest, which makes the human body the active site on which protest is enacted or performed. Suicide is how the person who commits to it tells the world that it has failed to carry out justice by making a statement that is irreversible, incontestable, and permanent. It is not only the suicide note that bears witness to the dead; the violence done to the body itself is a statement, an act.

Source: How not to read a suicide note? – Raiot