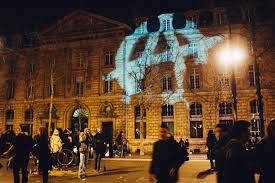 “What is happening in France, the gathering of activists, social movements, students, and exasperated citizens peacefully taking the debate on their future to the streets, is a sign that democracy in Europe remains in rude health”, said Varoufakis. “This is not just about protesting a particular legal bill or government policy, but much like it happened with the “indignados” movement in Spain, this is about people raising their voices against Europe’s slide into an economic and social malaise – against the dying of the light” the former minister explained. “As democrats fighting for a new Europe that the demos back into democracy, we must all join in and be energized by what is happening here. We need to listen and pay attention. To ignore or dismantle these peaceful forms of democratic expression would be another strike against all that is right and decent in Europe. This is why I shall be attending tonight”, he affirmed.
While the Nuit Debout movement was sparked last March 31st by labor reforms due to be passed by the country´s National Assembly next month, activists nationwide have transformed streets and squares into public forums to debate a myriad of concerns beyond labor laws such as democracy, social rights, education and the environment.
Cristina Soler-Savini is one of some one-hundred DiEM25 members present at Place de la République: “We obviously have a problem of political representation. This is why we are all here.” In her view, “as we look into the current state of affairs, not only in France, but all over the European Union, there clearly is a disconnect; a fracture that has gained visibility in France not only by the rise of the extreme right and social discontent, but one that runs deep all the way to Idomeni (the refugee camp on Greece’s border with the Republic of Macedonia). We joined DiEM25 because we believe in transparency and democracy as the basis to end this fracture.”
http://diem25.org/as-night-falls-over-paris-nuitdebout-and-diem25-join-forces-to-rage-against-the-dying-of-the-light/
@nuitdebout

One response to “As night falls over Paris, #NuitDebout and DiEM25 join forces to rage against the dying of the light”