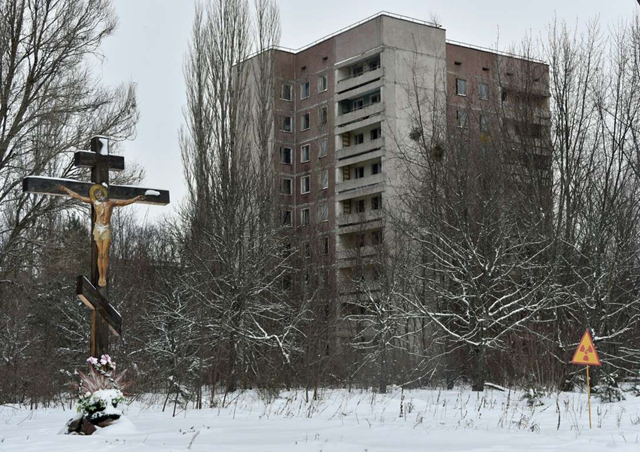 “SLAVUTYCH (The Guardian) – In a biting winter wind, Alexander Petrovich Zabirchenko walks slowly along a memorial to firefighters and workers who died in the Chernobyl nuclear disaster, touching each of the portraits engraved in granite. He does not shiver or complain of the cold. He is a big man and draws himself up to his full height before each sombre stone. “Here is Valeri, and here Vladimir and Alexandr and Anatoli … I knew these men,” he says. “I worked with them. They were colleagues and friends.” As one of the many Chernobyl workers who returned to the devastated plant to fight the fires, Zabirchenko is an official “Hero of the Soviet Union”. He bats away the honour with a wave of his hand. “These men were the heroes; every one of them. They died preventing an even bigger disaster. They saved not just Ukraine, Russia or the Soviet Union as it was, but the whole of Europe.” Next month, thousands of men, women, and children in the northern Ukrainian city of Slavutych, will gather at the memorial here to light candles to the 30 initial victims of the world’s worst nuclear accident. Three decades on, they will remember not just the dead, but the memories and dreams they left behind in Pripyat, the ghost city that was once their home. The story of Pripyat and Slavutych is a tale of twin cities: Pripyat, a former model Soviet metropolis built to house Chernobyl workers but abandoned to radioactive contamination and the ravages of nature; Slavutych, an urban phoenix that rose from the ashes of the disaster to replace it. […]”