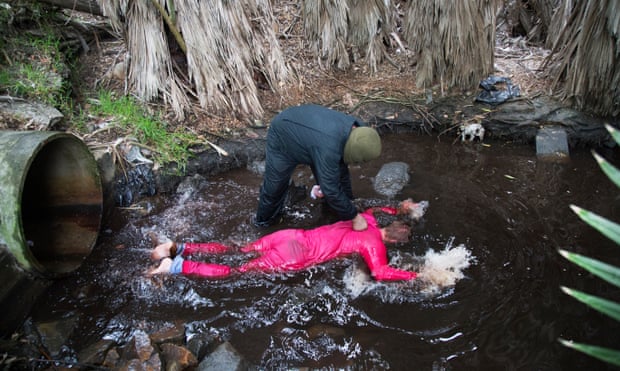 Pathologies of affluence or the terrifying freedom of a “controlled” exposure to vulnerability? There is a third option to considers, in the idea of this presenting a total doomer vision of the future you can experience in the present. At one point the guy behind this extreme haunt, although what it has to do with haunting in the ghostly sense is anyone’s guess, tells us that this is “survival horror boot camp”. The customers of his tortures get to experience the worst imaginable aspects of the future we’re so often promised: it is a collapsetarian Disneyworld. (What did Baudrillard say about Disneyworld?)

This ghoulish genius is a former navy man who will likely have had experience of survival horror in his training and/or deployment. Is the haunting his own? He talks about being a movie director using his cinematic eye to produce a real life theatrical performance. It isn’t real, he insists, even as the torture, drowning, choking, stomping, the terror and the violence is all real. Is it unreal to him because it is a staged re-enactment of some post-traumatic vision? And he claims that although it isn’t real it is an experience of the real he aims for. He uses cinema’s irrealism in the real world to generate an real experience- at least in terms of the emotions. He says we are too numb and his horrors produce the real terror we’re looking for.

And driving it all? People watching videos of the violence and claiming it isn’t real enough, that it doesn’t go far enough. And the hell house has to respond, the lunatic mind of the man behind it has to bring his traumatic hallucinations ever further into the materiality of flesh and blood. The very people who are symptomatic of the emotional numbness the haunted house is supposed to correct but for whom it instead only drives them on: all the terrible images of liveleak made just for them, and with the promise of a grim vision of participation. A terrible feedback loop of seductive horror.

This is a community exchanging places in one another’s insanities. Sadists and masochists who have no idea where their limits are, people caught between the flashbacks of a possibility damaged fighter-cum-director, who resembles a genuinely Ballardian kind of psychotic genius offering violence as therapy, and the post-catastrophic violences rehearsed in The Walking Dead and insane-psycho-slasher-family movies like the Hills Have Eyes.

“This is a live theatrical performance,” says McKamey, who majored in theatre studies before joining the navy. “It’s not real. If people were really hurt we’d be shut down. It’s smoke and mirrors.”

And here is the ultimate appeal: the harms inflicted cannot be real because there is no other stepping in to declare them real, no agency outside of and transcedental to the situation that can arbitrate and decide. This isn’t an invocation of god but it is an invocation of some stable force that would be capable of assuming the responsibility of the regulation of reality. But in the tortured worlds of those who live through it is it so simple as to say that this is the repetition of a trauma beyond McKamey’s or his clients? Is it too trite to say that once again these people symptoms of nihilism?

Mightn’t it be hat McKamey’s insane therapeutics is actually a more or less conscious attempt to dwell where it is impossible to dwell. He is designing an environment of the worst for his clients so that they might be able to affirm even that, even their own pain and horror. They move into the depths of an abyss necessarily delivered by human hands. They attempt to breathe in a zone of drowning. They attempt to extract pleasure from total abjection.

It isn’t my idea of fun, but as I sit here with a black eye and the lingering effects of a concussion, I have to wonder whether this isn’t a bizarre kind of therapy of exposure to and attenuation of an anticipated malevolent reality. These are our darkest bearers of the idea of survivalism. The first blood drawn by the idea of Fight Clubs, of stripping back all this civilisation bullshit, and of getting into the primal zones of our animality; is this the therapy enacted here? Perhaps McKamey is offering the world’s first dramaturgical exorcism of mind’s haunted by the catastrophic world. After all, the entire point as he McKamey understands it is the production of cortisol and adrenalin and activation of the primeval survival mechanisms that have propelled our species this far.

“Every year it’s got more crazy, more aggressive. We wouldn’t be infamous if we weren’t able to deliver the product.”

In an age of free floating anxiety disarticulated from the specific content of our post-traumatic subjectivity and an increasingly pre-traumatic anticipatory stress, the horror house is selling concrete objects, real tortures and abuses, that might ultimately serve as justifications for that anxiety. The horror of the real becomes the real of horror and we are finally relieved of the burden living within the noxious air of a nameless lurking dread; although the poisoned miasma does not clear, these survivalists, or those who can go all the way, are able at last to breathe.