“Another figure whom Latour quotes lately is the German political theorist Carl Schmitt; I have explained elsewhere the significance of Schmitt’s thought for key neoliberals like Hayek.
While one cannot be sure about the level of sophistication with which Latour mines the thought of such figures, we have a clear statement of why he finds them so interesting: I mean this is a common thing in political philosophy, that reactionary thinkers are more interesting than progressive ones in that you learn more about politics from people like Machiavelli and [Carl] Schmitt than from Rousseau. And the exceptions are extremely rare,
like [Walter] Lippmann… there is actually no connection at all with the idea of the multiplicity of beings and any sort of democratic position… we should not confuse… the idea
of multiplicity of beings and the consequent abandonment of the human-nonhuman distinction with any position about how to organize the polity (Latour et al, 2011, pp.96-97). To summarize: Latour believes politics consists of struggle without any hope of a transcendent court of appeal, which is why he is so attracted to figures like Hobbes, Lippmann and Schmitt. He explicitly eschews any appeal to Truth to ground politics, growing out of a conviction that constructivism dictates that truth is the outcome of struggle, but exhibits no special epistemic regularities or ontological stability. Because the portrait is one of unceasing agonistic strife, there is no program of reform, no conception of superior political institutional structures, no exemplar of political virtue to be found in his work. Science may be roiled with dispute and dissention from time to time, but the public just has to learn to roll with it. Most of all, there is nothing but ill-concealed contempt for those who strive to undertake science critique. The upshot of this Latourist project is that what exists in the way of science organization and scientific research is just fine the way it is. It is a doctrine of complete passivity. Perhaps the student might draw up a hydraulic fracking cosmogram, or a network graph, like Figure 3 below, copied from the Latour MOOC, to while away the time while they desist from engaging in any actual political opposition to fracking. 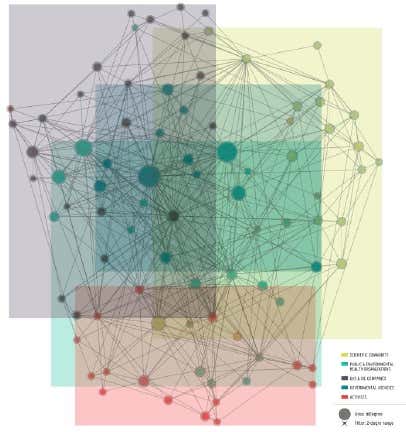 It has occurred to a few observers that this doctrine is ideally suited for a neoliberal era when universities are being dismantled in the name of privatization, rationalization and outsourcing; the ideal modern researcher must above all prove herself flexible, unattached to any specific discipline or set of core theories, and nimbly respond to the rapidly changing dictates of the market. What counts as knowledge today might be utterly discredited tomorrow. Resistance is futile.”
https://www.academia.edu/11571148/What_is_Science_Critique_Part_1_Lessig_Latour